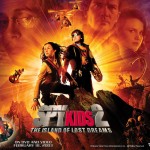 Working on this movie was one of the most challenging things that I’ve ever been a part of. Not only was this my first introduction to the world of large studio features, it was one of if not the first attempt to mix an action film using Pro Tools. At that time I had no real contacts at Digidesign and only a fundamental understanding of Pro Tools, film making and audio post. I was hired simply as a technician to make sure that everything was working and that there was a minimum of downtime. As least that’s what I was told…

My first day there I was presented with a reel of the movie and told to cut it, they needed it for a temp that next day. That night about 4am, I was alone working on the mix stage when Robert walked in. He and I had not met at this point and you have to remember that the door to the stage was about 20 yards from the front door to his house. He looked at me and said, “You from Austin?” I said I was and says, “hmm they told me nobody in town knew this stuff. What are you doing?” “Cutting a temp for tomorrow” I said. “Cool”-classic Robert. He got out his laptop and hung for a minute then said something like take it easy and that was it.

When predubs (which is the pre-mix where you mix the movie is sections) started, I met Sergio Reyes who was to become my mentor and partner. I looked at him, he looked at me, and I said, “so what do we do.” He says,”I dunno, no one’s ever done this before. We’ll make it up as we go.” At this time Pro Tools 5 had only 64 voices so we were constantly mixing down piece by piece by piece. We worked 7 days a week for about 8 weeks. It was a blast!

The real difficulty began as we started the final mix where all the elements are present at one time. To make this work, we decided that we would tie 4 Pro Tools systems together using time code and MIDI machine control which mostly worked. With that many systems most of which were rentals we had a lot of problems with crashing, corruption, and it was all worsened by the fact that at this point there was no one to go to for definitive answers, we were so far out on the bleeding edge that we were the experts!

Towards the end of the final mix, we packed up all the systems and headed to Sky Walker for fixes and print mastering. How I wish I could have enjoyed my time there but again we were so busy that we worked all the time. No we had to setup a hybrid system with our Pro Tools sessions and Pro Controls and their Neve DFC console.

By the end of this process I wasn’t sure that we hadn’t proven other than mixing on Pro Tools was folly. However despite all the jabs of “slow tools” etc. we had confirmed that it was do-able. Robert to his credit was the one that said now that we know we can do it, let’s perfect it.