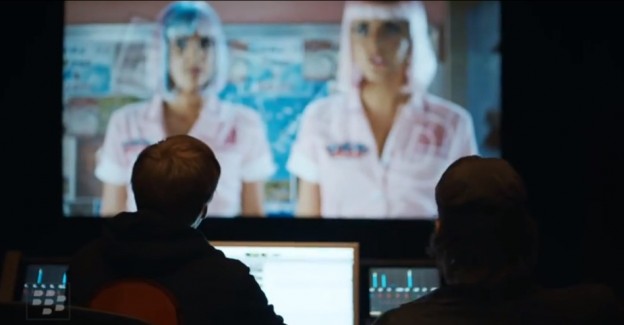 The Metric Post crew designed and mixed Robert Rodriguez’s Two Scoops for Blackberry’s innovative Keep Moving campaign. This project was shot with certain sections purposefully left as blank green screen so users could submit their own content and ideas for consideration to be included in the final short. Total delivery was broken into 2 trailers, 3 sections for user submitted gun design, dialog, and monster design, and the final 10 minute short.

The tricky thing about this project was that VFX were part of the submissions so we had to hold off on monster design until the very end of the project. This made for some very late nights, but whenever Rodriguez is involved, late nights are sure to be part of the equation. The movie’s a blast and getting to hang with the creative team from AMV BBDO London was great too. Those folks KNOW how to party.

You can check out Brad and Robert behind the scenes mixing the movie and our other Troublemaker pals in these two videos: