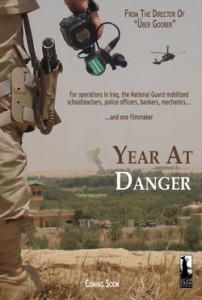 Director Steve Metze shot this movie while stationed at Forward Action Base Danger in Iraq. He sent the tapes home to his co-director and editor in breath mint tins. Many many tins later, Steve and Don created this brilliant feature length documentary that twists and turns and really tells the story of a new father struggling with the realities of war.

I am so glad that I got to be a part of this project. I had been working on it for weeks before I met Steve and when I finally did, it was like I knew him for years. The production audio was REALLY challenging on this project. We spent pretty much all our time cleaning it and smoothing it out. George Olziey provided a great score that really ties the movie together. I really enjoyed working with Steve and Don and look forward to another project as long as Steve doesn’t have to go to war for the next one.