Metric Post is an audio post facility in Austin, Texas that provides top level talent to the Texas film and media market. While we are noted for loud action features, we take a lot of pride in our ability to create and deliver a soundtrack that adds dimension to the story we are working with. We have worked on projects with huge budgets and projects with no budget. Contact Us! 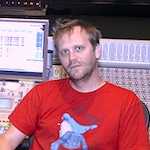 Brad Engleking: Re-Recording Mixer, Sound Supervisor, MPEG
Brad his been a sound professional in the film industry since 2000. During this time he has worked on a wide range of film projects from Robert Rodriguez’s Sin City to Terrence Malick’s To the Wonder. Brad is a wizard behind a protools system and also is the technical guru of the bunch. He can do just about any job in the sound dept. and excels in mixing, dialog editorial and sound design.

Brad particularly enjoys working with young directors and on independent films. His work on numerous experimental and documentary features and shorts can be seen at festivals around the world. In an effort to help educate future filmmakers, Brad has taught classes and lectured at The University of Texas at Austin Radio Television and Film department and at Texas State University’s Sound Recording Technology department, and has participated in panels at SXSW.

Sergio Reyes: Re-Recording Mixer, MPEG
If there is a director you idolize, Serg is on a first name basis with them. If there is a film that touched you and made you want to be a filmmaker, Serg mixed it. Seriously. A trip to his IMDB is time well spent. Sergio and Brad form the mixing team for film and television mixes. Typically Sergio handles effects while Brad works the music and dialog. There are legends in Hollywood about Serg, and time spent with him is not only a lesson in movie history, it’s also fall out of your chair hilarious. If you’ve watched a mix before, you know that it’s not always the most exciting stuff; but when Brad and Sergio are at the controls, we promise that at the end of the day you’ll be amazed at how the time flew by and amazed that while we were all having a blast, your project was finished and polished to a level beyond expectation.